It was an odd day for sure.  Out of the clear blue Santa got visitors.  His brother and two nieces stopped in to check on him.   They got permission to take him to a near by park and have a bbq picnic.  It actually went very well.  Santa did not stomp … or curse .. or throw things .. as a matter of fact he was uncharacteristically non-confrontational.  (Maybe associating with postal employees is actually a  good thing for Santa)

They passed a pleasant afternoon reconnecting.  Santa had quite forgotten how lovely it was to have family around.  Just before they left little Nel sat down by Santa, mustering up her courage (she knew of his bad temper) and staring straight ahead she urged Santa to work hard on getting well!  She reminded him that there are lots of kids out there counting on him.  He took it very calmly!

Even tho Alexa is spending more and more time at work helping Giovanni with his experiments she still manages to squeeze in some research for the book she is writing on wedding planning. 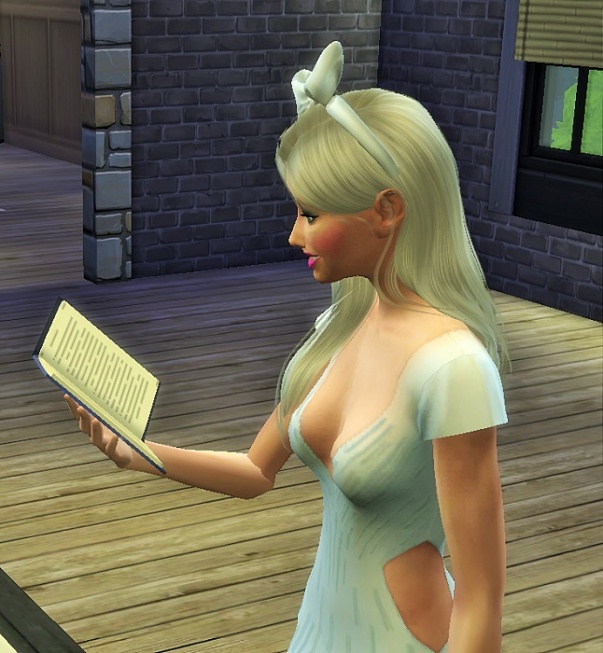 She spend almost every spare moment reading and researching the various organizational methodology put forth by other wedding planners.  Some are good but others NOT so good.

Plunking away at the computer … she adds her copious research notes to her book outline. 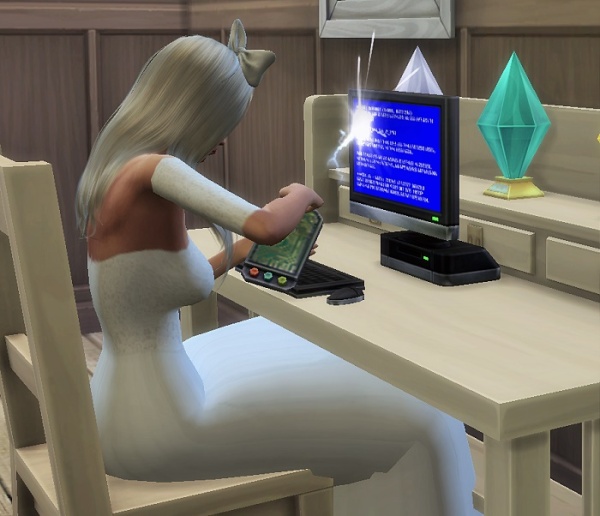 AUGH the computer is broken again!  The asylum computer seems to be forever in need of repair.  She is getting quite adept at getting the obstinate beast to run but it sure does slow her down!

Alexa and Frogger log the most hours on the computer.  Frogger has been working on his chameleon program and doing a bit of freelance programming to earn a bit of income on the side.  It is a constant cycle of work …

… repair!   Quite maddening indeed!  They NEEDED a new computer.  Frogger has decided it is time to act.

At dinner time he approached Geo and presented his well thought out plan.  The residents would come together and ask asylum staff to spend the discretionary fund on a new machine. Geo is incredulous at this .. the plea fell on deaf ears. 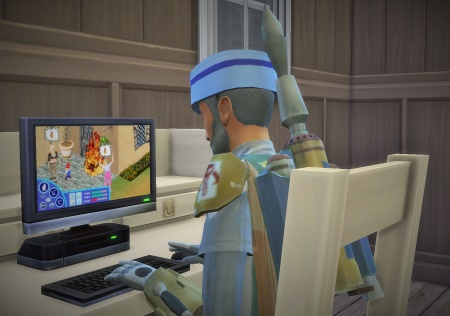 Now first of all Geo only uses the asylum computer for recreational uses.  He is certain that it is being monitored by alien forces and would not risk them discovering any of his research.  Secondly he wants the discretionary fund to be used for the purchase of a telescope so he can observe the skies.  This way he can get a forewarning when the invasion comes.  How can Frogger not see the far greater benefit of this?

Frogger is besides himself. He heatedly attempts to convince Geo!  From the kitchen he hears a shout from Abe.   They NEED a new stove.  Are their memories so short?  Did the stove not catch fire just last week?  Abe is worried that the whole asylum will starve if the kitchen remains in such a shabby state! He will not support either plan.

In desperation Frogger turns back to the table and looks pleadingly at Santa.  He knows none of them want Abe upset.   Immediately Santa buried his face in his cereal bowl attempting to avoid those pitiful eyes.   He wanted no part of this conversation.  Besides, he was hoping for a gem cutter.  After all he did need to get started on some Christmas gifts.

Frogger fell apart in front of their eyes.  Without a new computer his program would be seriously delayed.  He was doomed.

The boys were so occupied in the discussion that they did not see Alex slip off.  she wanted to log in on the computer to go get a bit of work done on her book.

13 thoughts on “#lisasinsaneasylumchallenge #11 The Computer Caper”