For the most part, Rose’s actions are autonomous or determined by her whims (esp when interacting on an outing).

I will be updating this in an observer/commentator role.

Can you believe we are nearing the end!

So in the last episode, we found that:

SOOO Let’s get into the house …

Prince Charming is very concerned for his daughter.  The stress of the contest has been weighing on her heavily.   He is truly fearful for her health (she already suffered thru a bout of Sweaty Shivers).

He has insisted that she take a break from the suitor house for a few days and has put her up in some lovely quarters in downtown SanMyshuno.

It is quite posh (Daddy knows what his girl likes) … she IS a princess after all! 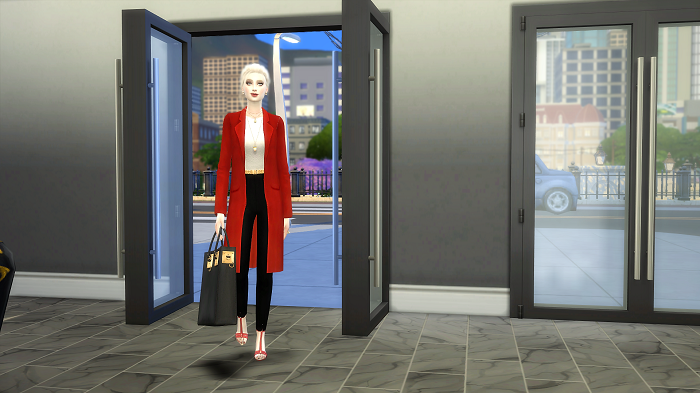 The truth is she knows she needs time to collect her thoughts on this challenge too.   Saying goodbye to the suitors has been getting harder and harder.  She fears it could get more complicated and wearisome in end.

Now with the selection being out of her hands (again) she is very fretful.  She even snapped at Snow on the phone the other night.

Prince wants her to take some time to consider … is this something that she wants to see thru to the end?

If she were being totally honest right now she did not know!

She settled into her suite and in the evening she took a bit of time to explore the street happenings near her suite.  The festival-like atmosphere with its bright lights, colorful vendors, and delish aromas was a welcome distraction for a few moments and helped her clear her mind of scrambled thoughts and conflicting emotions.

WELL, that did not quite go the way she had planned.

After a quick clean up, Rose realized she was quite hungry.  She had no inkling to go back out so she decided to explore the well-appointed kitchen to see what she could find.

Rose is a wonderful cook and seems to be able to whip up amazing meals out of little of nothing.  Tonight was no exception …

A pinch of this and a bit of that .. the resulting veggie stir fry was divine .. even if she did say so herself.

Rose pondered over her situation as she ate.

Looking up at her ‘dinner companion’ she asked, “What do you think of all this?”

Rose paused in her deliberations long enough for a response but (long sigh) the girl in the picture was MUM.  She offered no word of advice aptly spoken to help Rose along with her mental wrestling.  Whatever her thoughts were on the subject she was keeping them to them to herself. (AUGH RUDE) Tomorrow Pace was scheduled to arrive early for his solo date but tonight she struggled with her burden alone.

The morning found Pace and Rose enjoying the small secluded patio.  Rose was making a delectable Fruit Kebab for their breakfast.

Pace had his own dilemma … 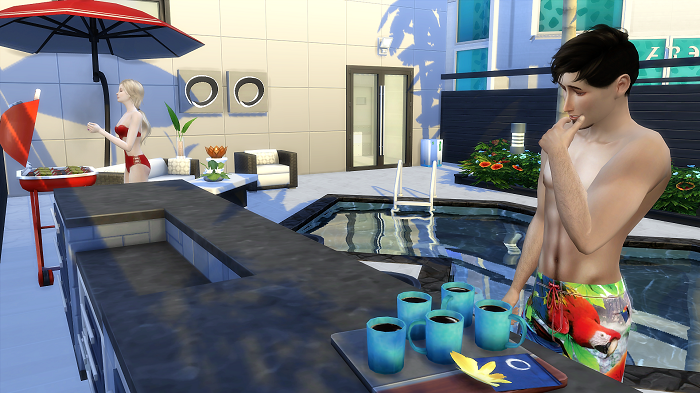 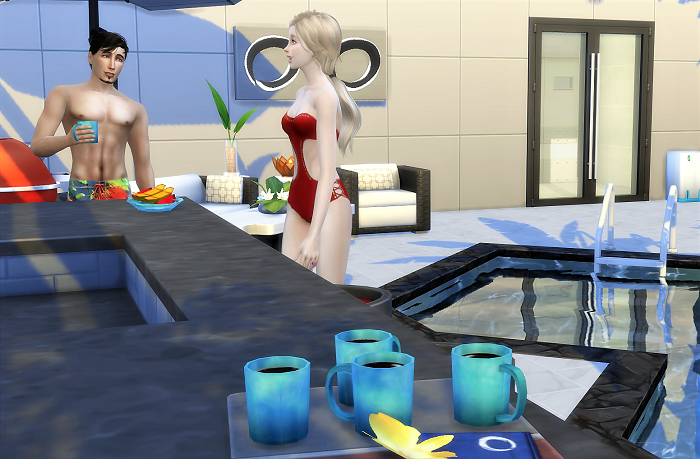 AND they say I AM BLONDE, Rose thought to herself.

Pace is a cutie and very very sweet BUT not always fully engaged with the here and now.

Rose was curious about his thoughts … she offered a penny for them.

“When I was coming in I noticed a sign for a hotel spa.  Thought that might be a good place for you to relax and put your concerns away for a while.”

Rose smiled at him warmly and nodded in agreement.  How kind of him to think of her well-being on his solo date.   It sounded just like what she needed.

Rose went with the relaxing hot stone massage but Pace opted for the rigorous athletic massage.

He may have had some second thoughts just a few minutes into the treatment. 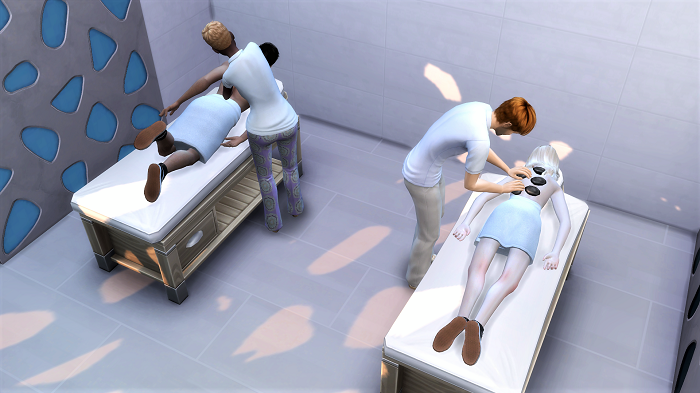 All the groans and cries of pain had Rose feeling very bad for him.  His masseuse really seemed to enjoy her job!

They stopped off at the little gym afterward but poor old Pace could hardly move after his trouncing on the massage table!

Rose was afraid he would fall off the treadmill and hurt himself so she suggested some time on the mats in an adjacent quiet room.

She hoped a bit of time spent stretching and getting serenely focused would help them both. 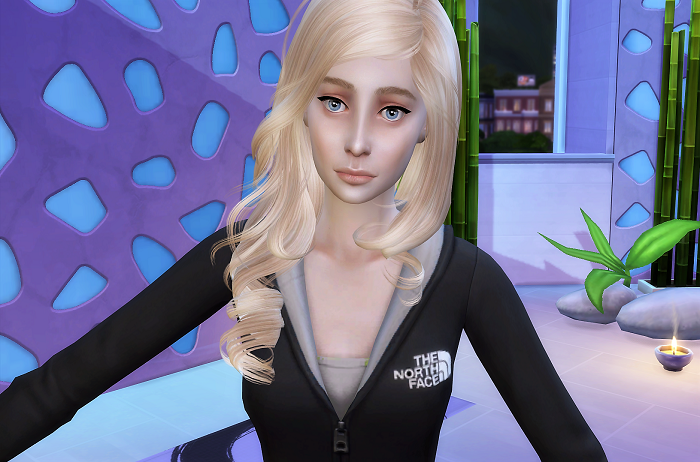 “What on earth is wrong with you?  COME ON NOW!  Let’s get it together girl.  Good grief!  Pull out of this!”  Rose lambasted the poor princess in the mirror.

It must have done some good because she got herself ready to meet Jack for his solo date. Jack is prompt and looking pretty good.  Rose compliments his attire and Jack, ever the gentleman, carefully and thoughtfully returns the compliment.

TBH he was thinking WOWSERS SHE IS MIGHTY FINE!

It was all smiles and chuckles between them so far …

and then, as aways, SOMETHING takes a turn! 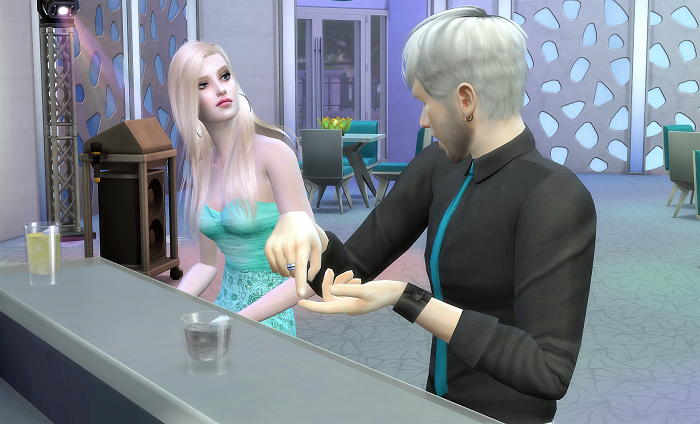 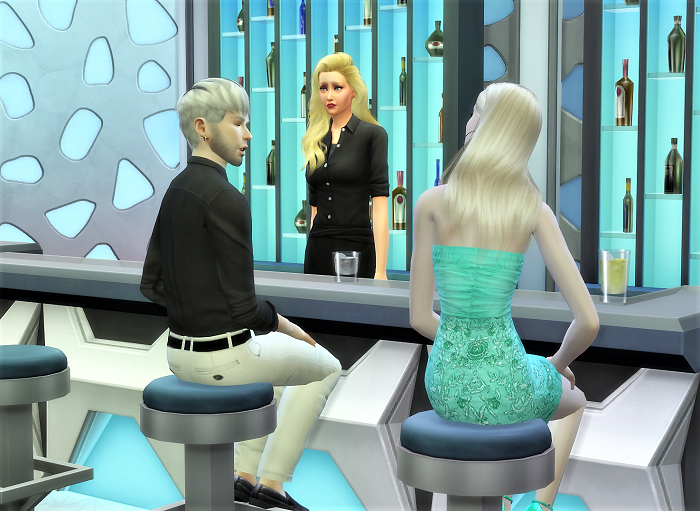 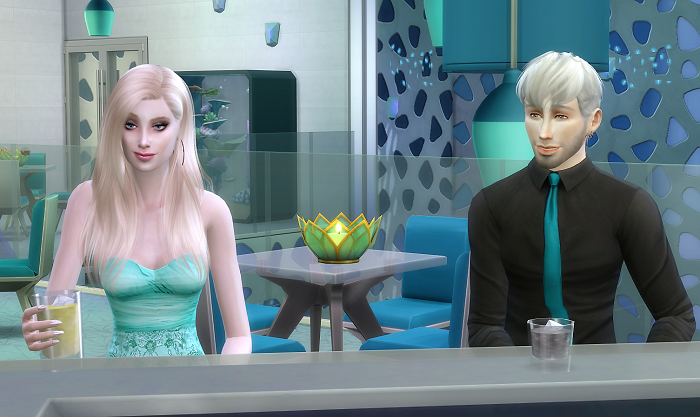 By the end of the evening, she had even convinced the dance phobic Jack to get out on the floor and shake his groove thing! (some of you will still be singing that tomorrow he he he he)

Jack escorted her on a walk out to the lake.  Listening to the soft aquatic sounds mixed with ambient city noise seemed to put her at ease.

Speaking softly, he finally broke the silence, “You know Rose, whatever choice you make we all will understand.   Everyone of us suitors just wants to see you happy.”

Rose looked into his sincere face and melted in a tearful puddle.  Jack held her close and let her cry for a moment and then he escorted her back to her suite.

“Good night Princess.  I will leave you to your decision.  Until tomorrow then.” 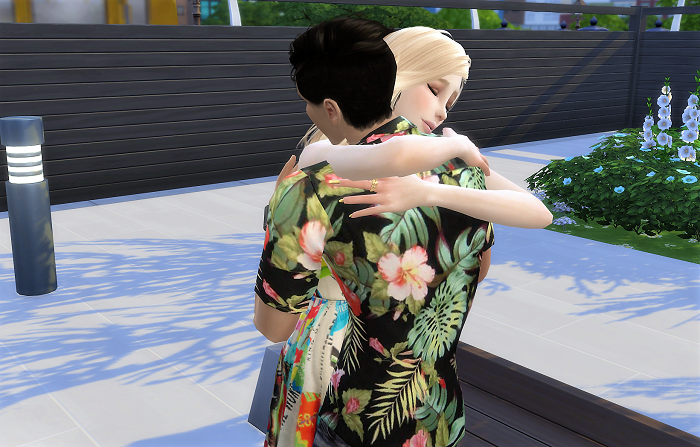 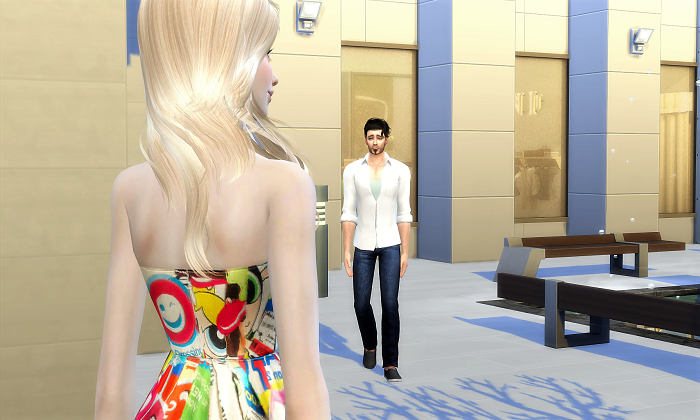 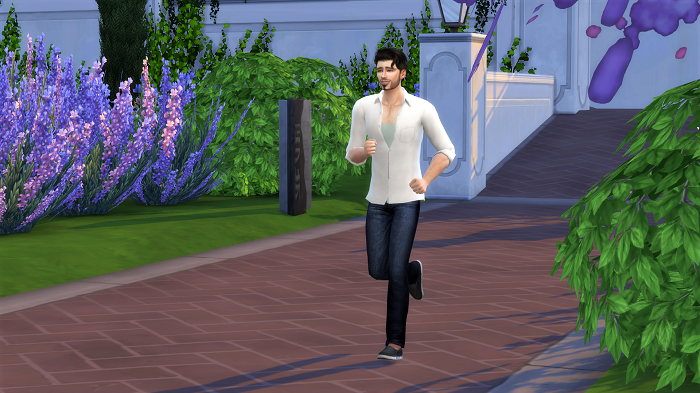 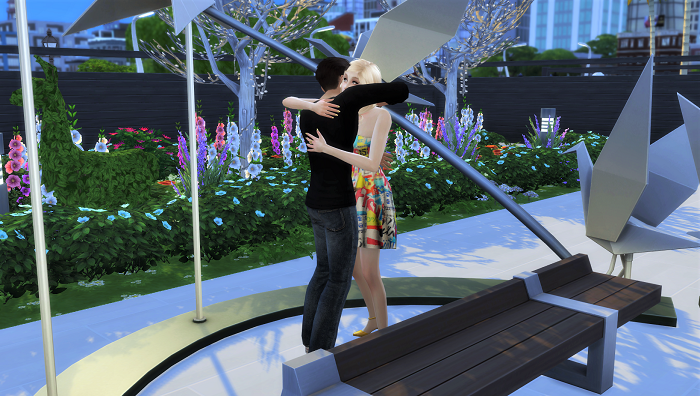 The decision was made and now all there is left is to go forward to the end!  She has to trust the people to make the right decision when required.  They know her and they want her to be happy too! She can trust them.

Daddy has promised her a BIG surprise tomorrow .. she can hardly wait to see what it is (Prince Charming is VERY good at surprises)

A little retail therapy will help pass the time! 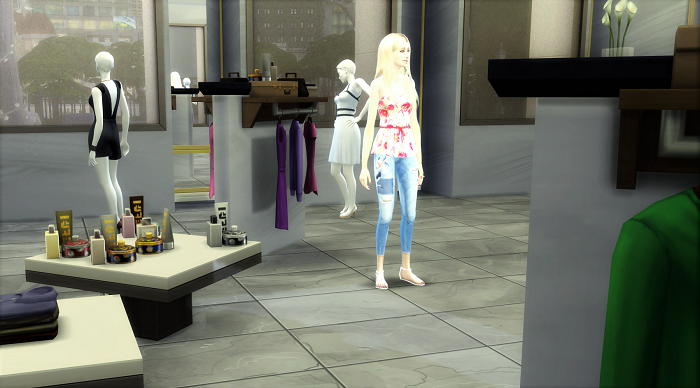 The next moring, true to his word, daddy sent four precious surprises!

The venue is from the FAB Simoniona … so versatile and plays like a dream in game!

36 thoughts on “Rose White: Search for a King (A Bachelorette Challenge) #9 Three Roses and Four Surprises”