Before I get into the update I would like to say THANK YOU to all those who voted for me for simlit fav author and dramatic story (Charming Tales).

There was TOUGH competition but I got the top nod for both!

You guys are awesome! Love you all!

This was Simlit fan/reader led & initiated (with 1,770+ votes) and I cannot think of a lovelier honor!

Rose had been so happy to have her mum and dad’s presence with them, but now it was time for them to return home to Windenburg.

With so much in upheaval back there Prince and Snow did not think it was wise to stay gone too long.

“You know Alexander is not the brightest bulb in the string,” Prince confided to Mike. “And with him running things …”  Prince finished his thought with shrug and a shake of his head.

They were especially excited because Shaman had promised he would continue his research on supernatural teleportation and soon they might be able to travel and visit their other children too.

Rose finally has her mojo back.

She has fully embraced her life as an island mom.

Whether it was the special tea brewed for her by the Shaman,

or the visit from her parents,

or support from Mama,

or even just her body naturally correcting itself,

no one could say for certain,

but whatever it was the “baby blues” were gone!

She was determined to figure this mothering thing out.

She and Haukea even made an attempt at starting the whole potty training ordeal! 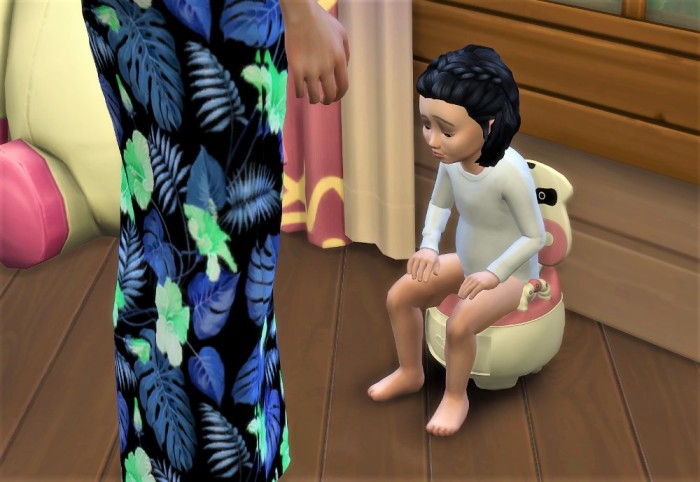 Which quite honestly scared both of them to death!

Neither one of them had any clue what to do.

First few tries did not go so well.

Rose is a tiny bit freaked out that she might do it wrong.

Ahhh dear Rose, if she is 32 and not potty trained then you can worry but until then just relax. 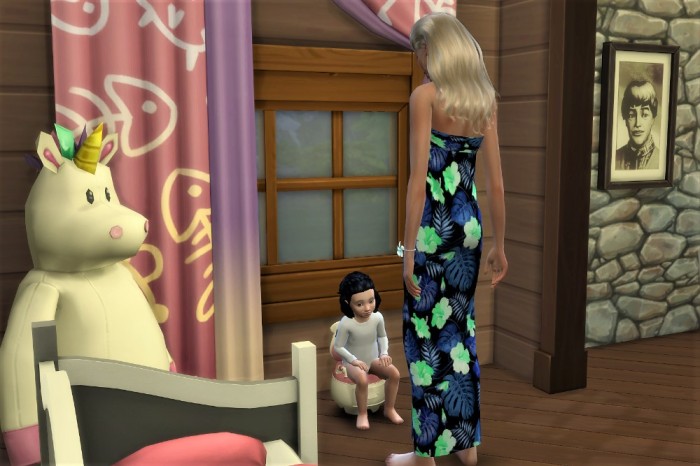 Daddy Mike finds the “other end” much easier to deal with when it comes to toddler care.

He impresses his little princess with a late night nosh.

“We see things a little differently here in the islands,” Healani began.

She had arrived unannounced and said she needed to talk to the family on a very urgent matter.

Healani explained how in the islands, the family was very important and she had serious concerns that Rose and Mike were in need of Ohana support.

“Family, Ohana, is the cornerstone of our culture.

Our families here are very committed to each other and we make time for each other.

We express our appreciation freely and we know that in the bad times we can count on one another.

We are considered poor by world standards but for us, Ohana (family) is our one great wealth.

You may have noticed already that we have larger families and we keep the generations together in the same home.

My heart breaks knowing you are alone.

I am coming today to let you know I want to be an Auntie for you two and especially for little Houkea.

Even tho I have none of my own I am very good with children.

I would be honored if you would accept my offer.”

She was happy to be a part of Healani’s Ohana! 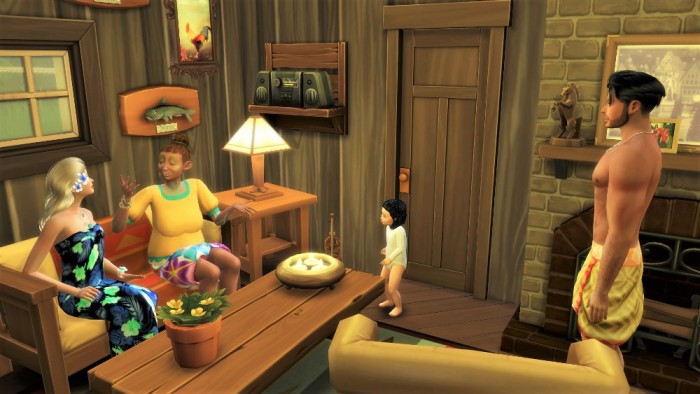 “This sweet little keiki and I will get to know each other now,” Healani informed Mike.  “you have nothing to worry about.

You spend some time with that pretty wife of yours.”

In light of her kindness, Mike found himself without words and could only smile his agreement.

It did feel good to be a part of such a wonderful ohana.

It did not take long before a very special bond formed between keiki and auntie.

Auntie Healani (Haze from Heaven) grew to love princess Houkea (Snow White) and was deeply devoted to the Charming family.

To the castaway King and Queen of Windenburg, dear Auntie was a valuable jewel in the treasury of their hearts.

They were certain that there was no finer Auntie on any island! 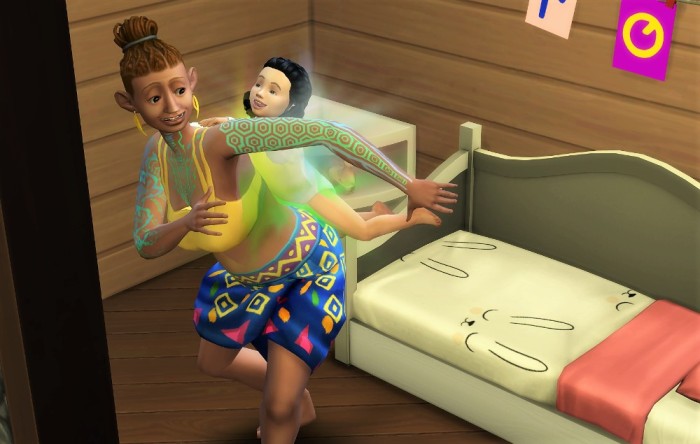 Mike and Rose took good advantage of the times when Auntie would visit.

Mike adored being a daddy but his heart has always been sold out to his sweet Rose.

Together, they enjoyed visits to the island where they first landed.

They reminisced of this and that as they walked.

Mike did not miss getting struck by lightning so many times and Rose did not miss the stone beds nor the out of control campfires!

But all, even the hardships, were recalled with delighted amusement. 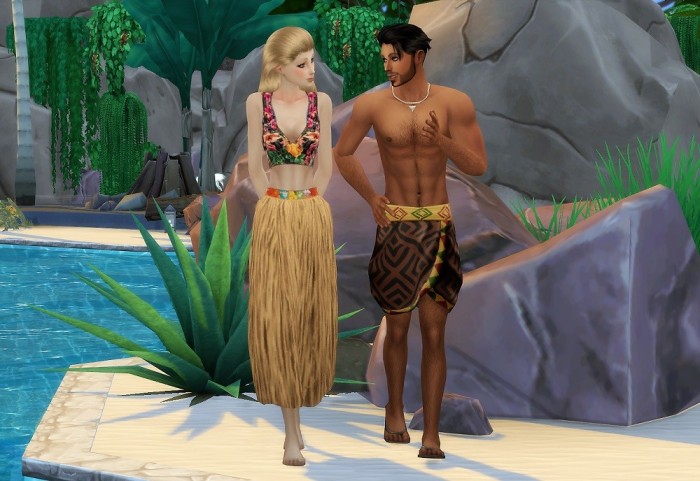 Top of the list on each visit was the harvesting of (and snacking on) the fruit trees they had so carefully tended early on.

A couple of times they even visited their favorite island flora for a little romp in the shrubbery. 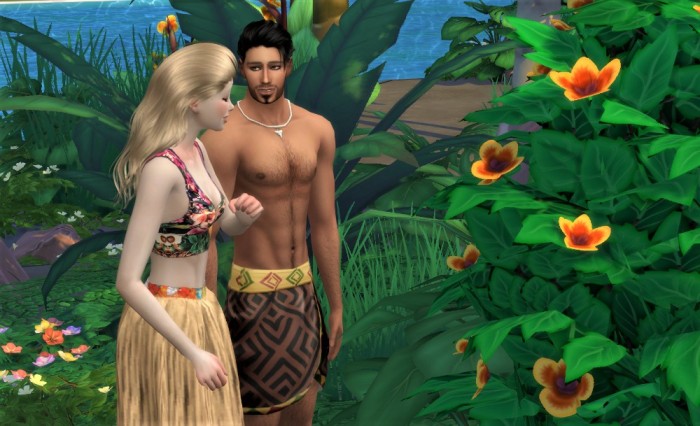 AND of course, there was the business of Dagon’s tribute.

Mike kept careful records of everything brought to and accepted by Dagon. 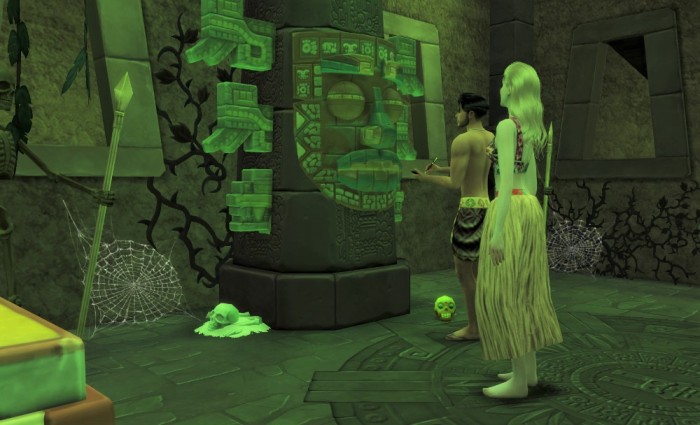 He recorded all instructions and 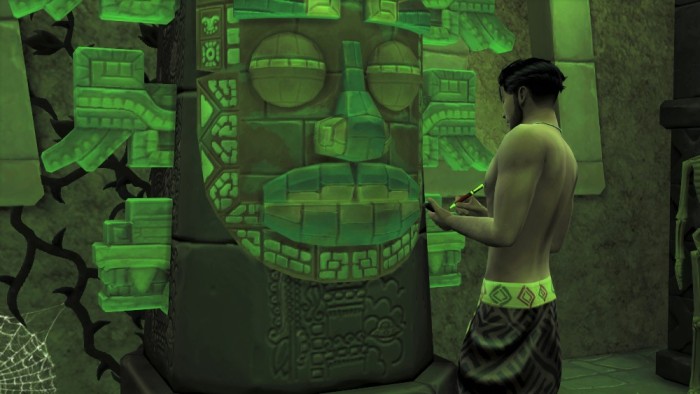 other edicts as well.

Rose always had a squabble to pick with Dagon!

She would raise her voice, stomp her foot and express her distress and irritation of one thing or another.

At first, Mike was quite fearful of what Dagon might do to his little hot-headed wife.

He had made her wet her pants a number of times but she never seemed to learn.

As of late, Dagon seems rather amused by her rantings.

Miraculously, she has gone home dry the last few times.

Once Mike tried, very politely, of course, to bring a grievance to him.

Apparently, Mike does not get the same level of grace that Rose enjoys.

They have been a few times to deliver gems to be counted towards the tribute.

Mike has learned a lot about the fine art of fishing. 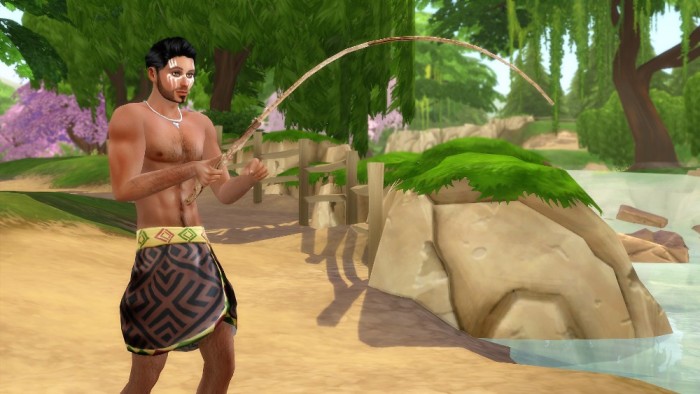 His good friend, I’akane (a Menehune fae .. ahem vampire), took him under his wing and has taught him so much about catching a fine fish.

The Menehune fae are the island’s most expert fishermen.  It is a primary ingredient in the food they need to survive. 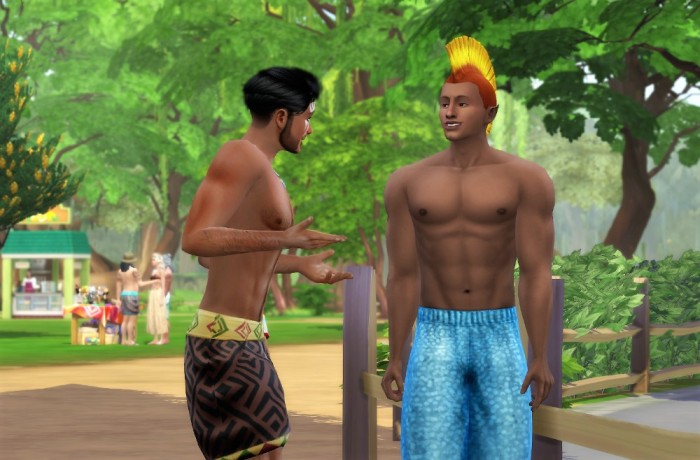 Sometimes Rose goes along just to spend time with Mike.  She does not get the same level of satisfaction from it that Mike does.

She has tried a LOT but no fish. 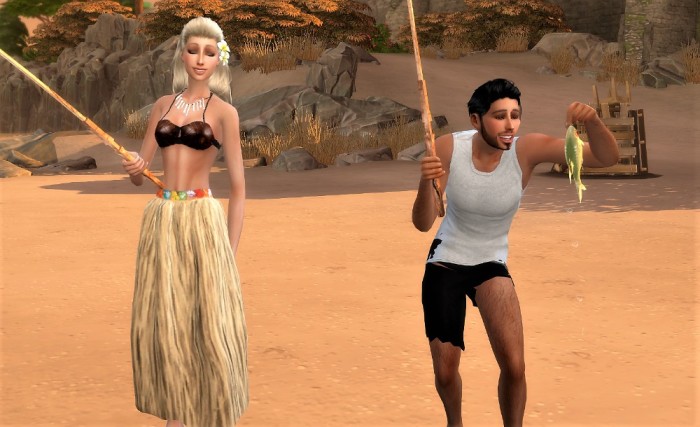 BTW she threw it back because she felt like she knew it and she could not eat who she knew.

IN the marketplace is where Rose truly shines.

When you get sweet demure little Rose behind that table she becomes quite the hawker.

Even old tightwad, Kalani, moves in closer for a look.

He never buys of course … ONLY LOOKS.

I think little Maleah behind you is a much better target. 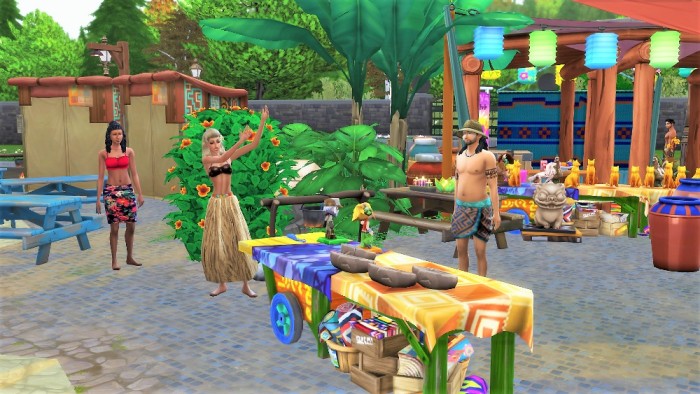 Mike is not so cray cray about the market. 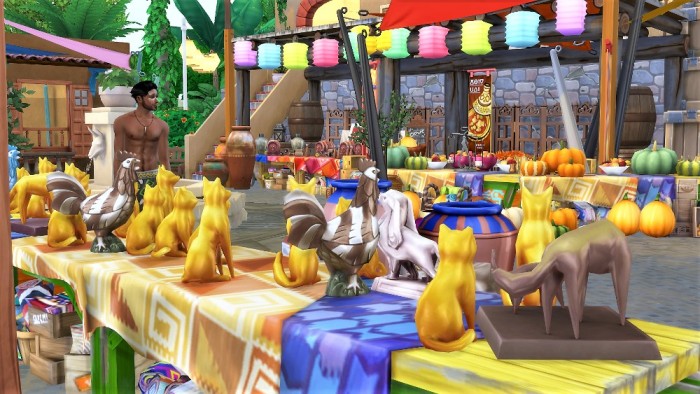 Losefa feels much the same way about the market.

He and Mike gravitate to a quieter spot.

Two awkward peas in a pod chatting up local fishing hot spots as they ignore the hustle and bustle all around them.

Of course, there Johnny on the spot is old lookielou Kalani …. again.

Elder Kohana wants to chat about the upcoming festival.

Neither will buy a thing!

Looks like Old Auntie Hekili and Auntie’s Healani’s hubby, Uncle Amu, had their eye on the same trinket.

A spat broke out because old Auntie Hekili did not appreciate that Uncle Amu did not differ to her.  She felt was a blatant disrespect of her position in the community.

This is not good for business!

Quick Rose, chat up Kaulana.  I heard it is his wife’s birthday and maybe you can give him some idea of what Nalani might like. 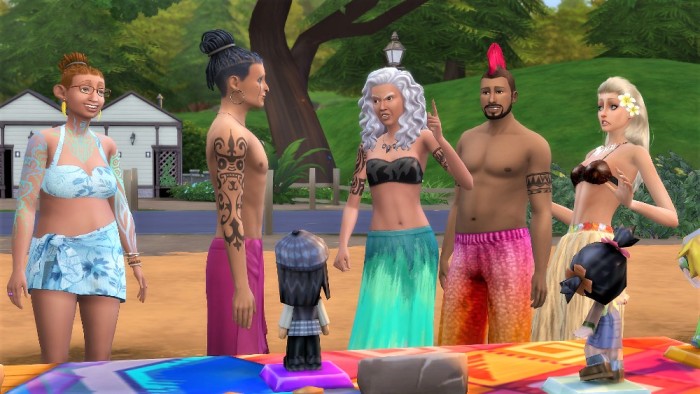 In this story series:

Table of contents:  An Era of Charming Tales: (current) Table of Contents

Many thanks to the creators featured in this blog!

New to the story this time: 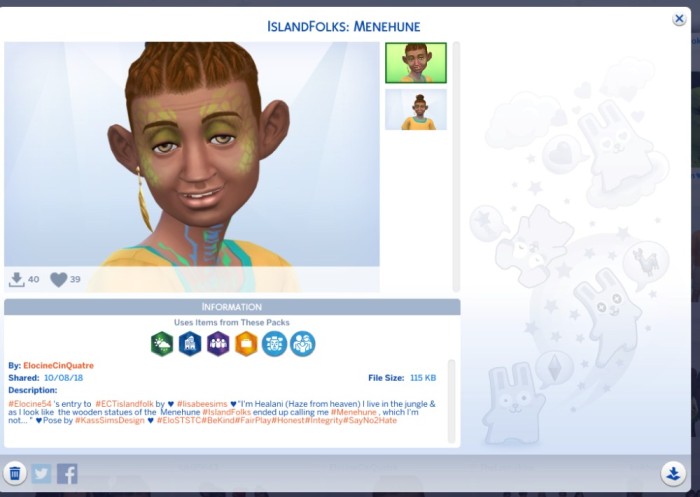 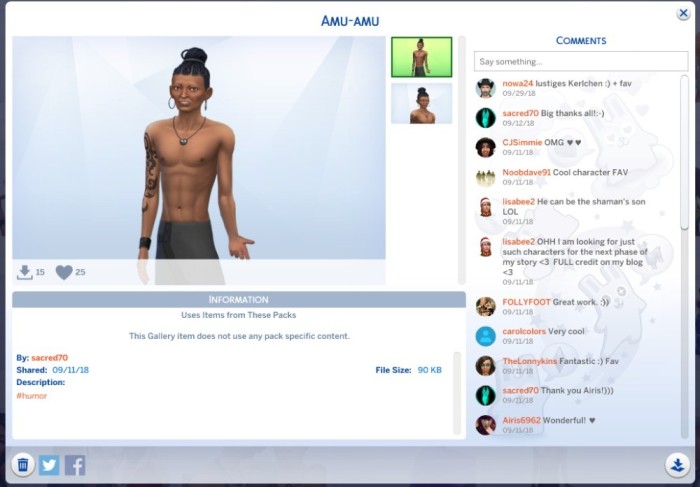 I wish there were more screenies of this magnificent build .. but it will be a fixture in the story so more will be seen later .. it is a colab between auvbri and Simproved

A huge TY to all the wonderful simmers who contributed FAB sims for my casting call.

I will add them in a little at a time (along with some wonderful builds I have found in the gallery).

I am building the lost world of Gerbit Archipelago.

These families and builds will weave in and out of my story.  I will credit the creator in the first story update that features them 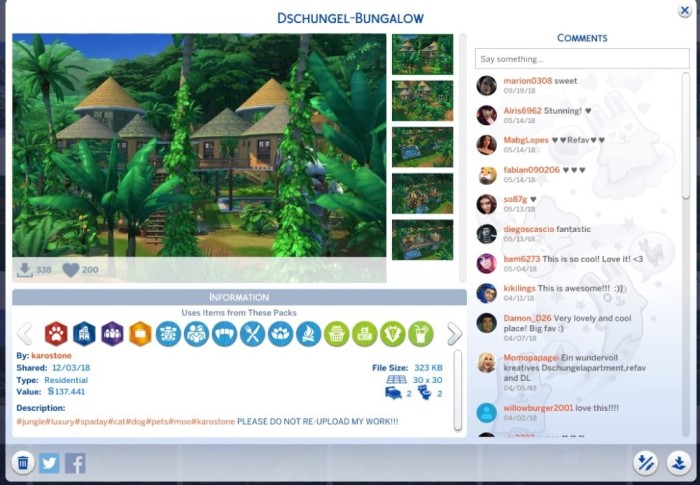 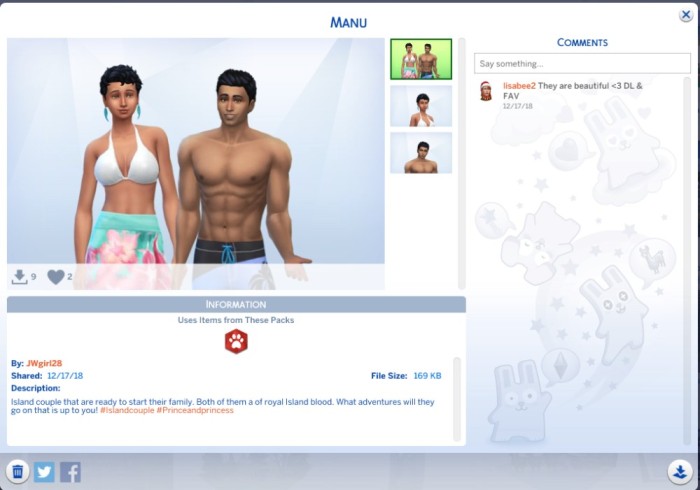 I am only 5 updates into the new rotation …